In 2010 I was discovering this application called Twitter. Okay that sounds more momentous than it actually was, but yeah, Tweets and stuff. Then I received a message about a call to artists and the recruiting/submission process was simply based around if the post reached you.  The "social experiment-iness" of it intrigued me at first. The Children's Library in Moss was the focus of an art show organized by David Sandum, where artists were to send in small works to be sold. He was shooting for 140 (the size of a "tweet" in typed characters) but got many more and the show was a great success.

This year he has planned a 2nd "Twitter Art" Exhibit, and put out the call to new and returning artists and I am sending my art today!
Here is a photo of my piece, on tea paper with black/red ink and white/bronze acrylic. 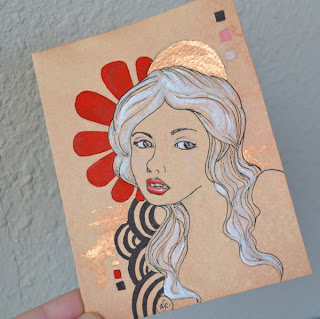 And for those of you who just won't be in Moss in March (because I won't either! I will be in arting it up in Texas!)....I have added prints of new work in my Etsy store and updated the 2012 originals in the image galleries on my website- stop by and take a look!